On another note… Canvas Giclee Prints

This selection of Giclee Prints have been produced for different reasons. Each of them are produced on a stretched block canvas to the same size of the original painting and hence are a little more expensive.

To counteract the cost there will be no expense on framing as these are meant to be hung without frames. The thick edged chunky canvas set off the images and the images suit being unframed.

The title, signature and number will be printed down the edge of the canvas. These may take a little longer to reproduce when ordering. 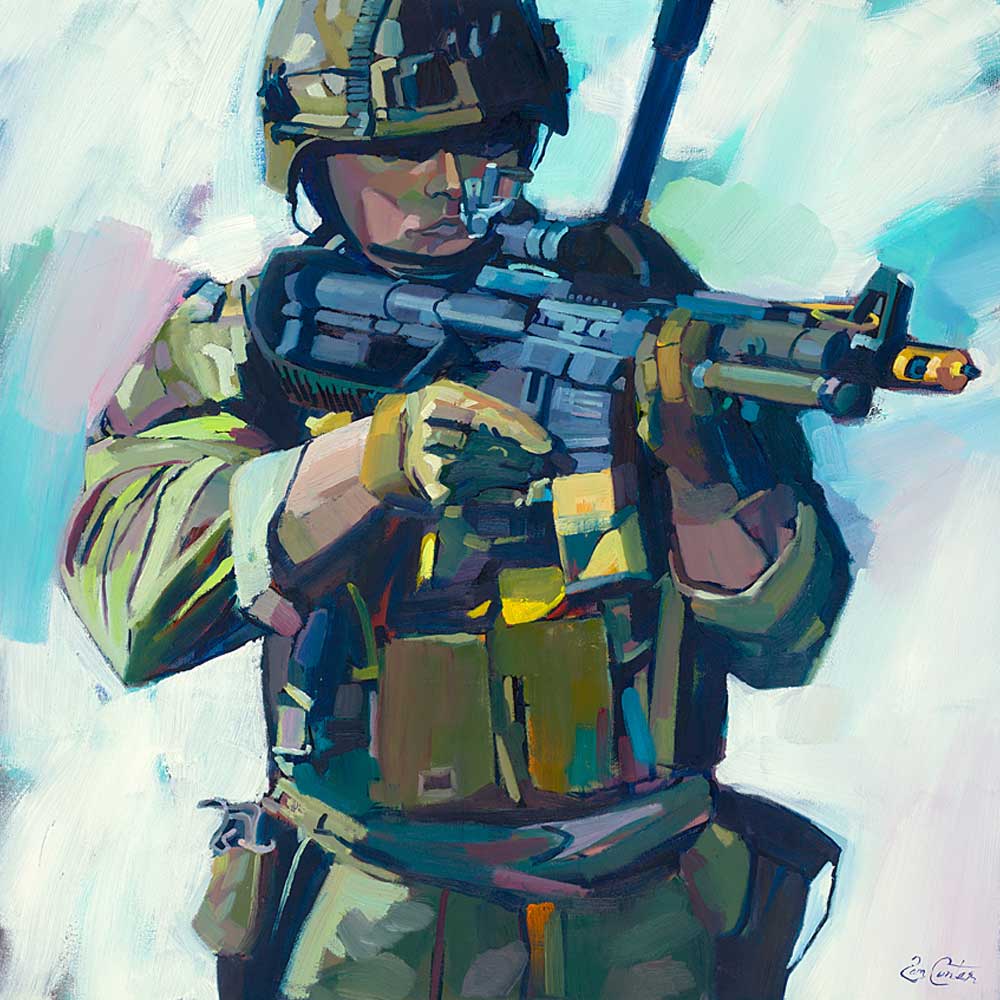 I was inspired to paint Royal Marine Commando 32”x32” as I was so impressed at the discipline and intensity of mission that this young man has shown in his career choice. This is real life.

This inspired series show the life, interactions and characters of the highly Endangered Species (Mandrillus Leucophaeus). I visited the Pandrillus Primate Conservation Charity in Nigeria in 2006 where Elaine worked voluntarily.

She showed me round the Pandrillus sites and explained about the ever increasing problems with deforestation and illegal hunting. The visit included going up to Afi Mountain Rainforest site where the Drill Monkeys and Chimpanzee live in large natural forest enclosures protected electric fencing. I felt honoured to watch many of these Bushmeat orphans engage with one another, bond and observe the group dynamics.

The profits of this Giclee range will be given direct to the charity to help continue with its incredible work. To see more about the charity and its work please visit: https://www.pandrillus.org 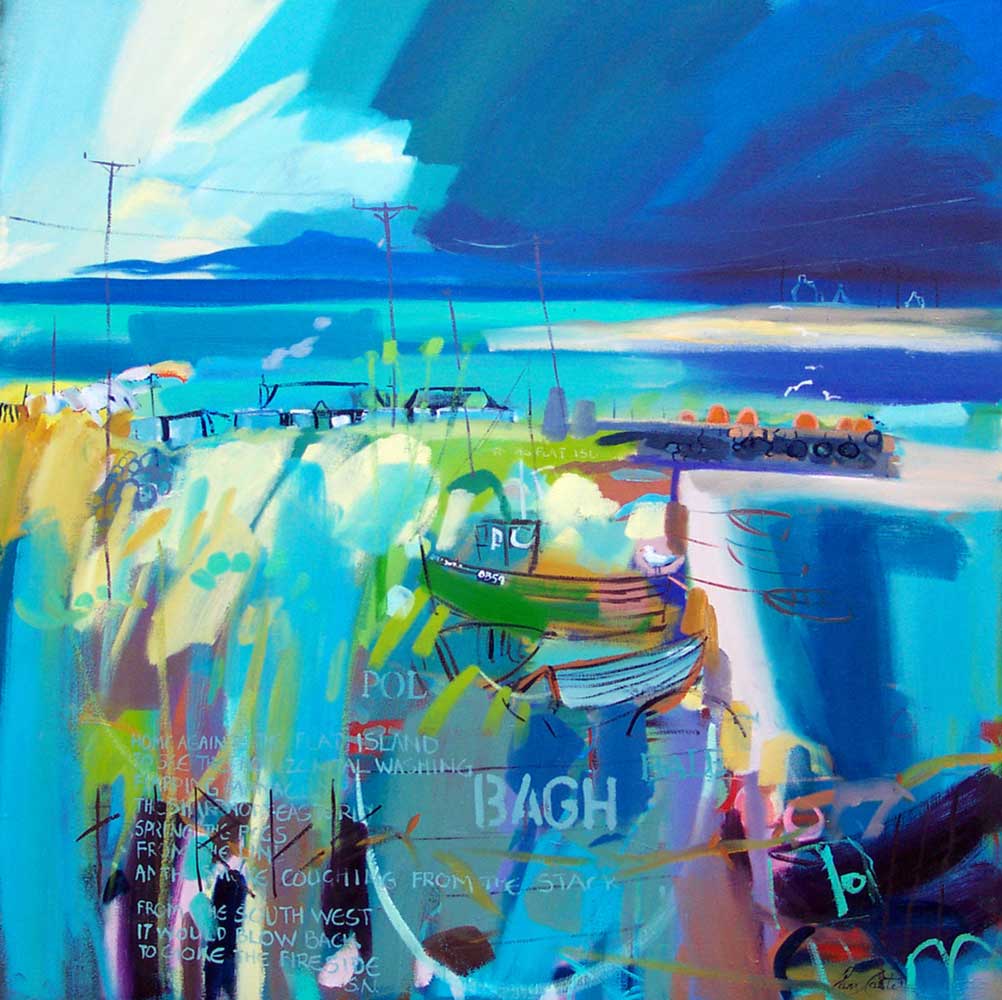 The Island range of paintings with annotations, folklore and historic imagery are now being produced on 32”x32” canvas. The Flat Island (Tiree), The Sacred Island (Iona), and The Long Island (Lewis) are a tribute to the uniqueness of the Islands . When I sketch on the Islands I always think of the history and folklore and sometimes write these down. I’ve included symbols in some of them. For more information on the annotations see below:

“Home again to the flat Island to see the horizontal washing flapping maniacally.
The sharp north-easterly springing pegs from the line and the smoke coughing from the stack.
From the south west it would blow back to choke the firesiders.”

I am delighted to have received an award for this painting from the Paisley Art Institute in May 2009.

It has annotations - three significant dates:
Iona’s place in history was secured in 563 AD when St. Columba arrived on its white sandy beaches with 12 followers, built his first Celtic church and established a monastic community.

He left Ireland for Scotland not as a missionary but as an act of self-imposed penance for a bloody mess he had caused at home. Iona as the first place he found from where he couldn’t see his native Ireland. One of the features on the island is even called “The Hill with its back to Ireland”. That features in the painting - it is the Gaelic writing at the bottom.

The Book of Kells is dated 800 Ad with the first pirate raid and viking raid shortly after. All the dates on different sites differ. I have 1156 as the success of the Lord of the Isles. The Birlinn is depicted The birlinn was a wooden vessel propelled by sail and oar, used extensively in the Hebrides and West Highlands of Scotland from the Middle Ages on. Variants of the name in English and Lowland Scots include "berlin" and "birling". The Gallo-Norse term may derive from the Norse byrðingr (ship of burden).

In the distance is the island of Staffa - The Vikings gave it this name as its columnar basalt reminded them of their houses, which were built from vertically placed tree-logs.

The same columns are seen in Ireland’s Giant’s Causeway - Fingals cave “The Cave of Melody,” one Irish legend in particular explained the existence of the cave as well as that of the similar Giant’s Causeway in Ireland. As both are made of the same neat basalt columns, the legend holds that they were the end pieces of a bridge built by the Irish giant Fionn mac Cumhaill (a.k.a. Finn McCool), so he could make it to Scotland where he was to fight Benandonner, his gigantic rival.

I have tried to suggest that in the stripes - a continuation to Ireland.
My poem is at the top and the Celtic cross all sit in a typical Iona landscape.

The imagery in this painting allude to the main historical sites. Callanish stones, Carloway Broch, The Black Houses, Norsemen, The Whale Bone arch. Again it has a poem by Suisaidh NicNeill - ‘Reel on Reel’.

View my Canvas Giclee Prints in The Shop